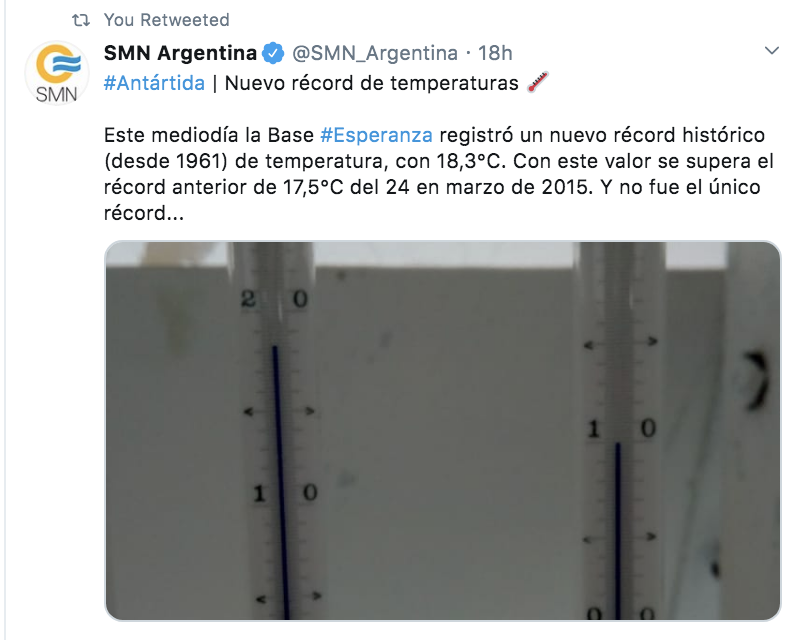 The Argentine research base, Esperanza, on the northern tip of the Antarctic peninsula, set a new record temperature of 18.3°C on 6 February, beating the former record of 17.5°C on 24 March 2015, according to Argentina’s national meteorological service (SMN).

A committee for WMO’s Weather and Climate Extremes Archive will now verify whether  this indeed is a new record for the Antarctic continent, which is defined as the main continental landmass.

“Everything we have seen thus far indicates a likely legitimate record but we will of course begin a formal evaluation of the record once we have full data from SMN and on the meteorological conditions surrounding the event. The record appears to be likely associated (in the short term) with what we call a regional "foehn" event over the area:  a rapid warming of air coming down a slope/mountain,” according to WMO’s Weather and Climate Extremes rapporteur, Randall Cerveny.

Verification of this maximum temperature record is important because it helps us to build up a picture of the weather and climate in one of Earth’s final frontiers.” The Antarctic, like the Arctic, is poorly covered in terms of weather observations and forecasts, even though both play an important role in driving climate and ocean patterns and in sea level rise.

The record for the Antarctic region – that is, everywhere south of 60 degrees latitude – is 19.8C, taken on Signy Island in January 1982.

The Antarctic Peninsula (the northwest tip near to South America) is among the fastest warming regions of the planet, almost 3°C over the last 50 years.  The amount of ice lost annually from the Antarctic ice sheet increased at least six-fold between 1979 and 2017. Most of the ice loss takes place by melting of the ice shelves from below, due to incursions of relatively warm ocean water, especially in west Antarctica and to a lesser extent along the peninsula and in east Antarctica.

Spanning 14 million km2 (roughly twice the size of Australia), the Antarctic is cold, windy and dry. The average annual temperature ranges from about −10°C on the Antarctic coast to −60°C at the highest parts of the interior. Its immense ice sheet is up to 4.8km thick and contains 90% of the world’s fresh water, enough to raise sea level by around 60 metres were it all to melt.

Some 87% of glaciers along the west coast of the Antarctic Peninsula have retreated in the last 50 years with most of these showing an accelerated retreat in the last 12 years. 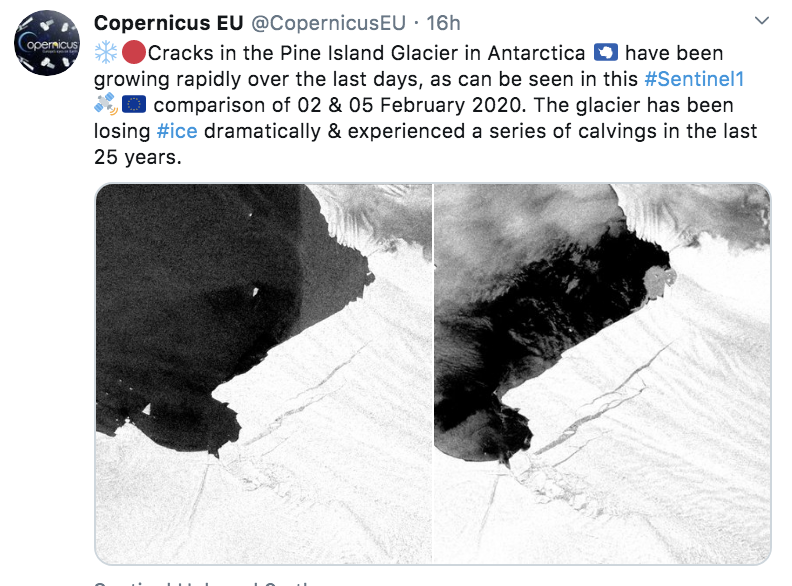 Cracks in the Pine Island Glacier in Antarctica have been growing rapidly over the last days, according to satellite images from Europe’s Sentinel1. The Pine Island Glacier is one of the primary ice arteries in the West Antarctic Ice Sheet. The two large rifts were first spotted in early 2019 and have each rapidly grown to approximately 20 km in length.

Pine Island glacier, like its neighbouring Thwaites Glacier, has been dramatically losing ice over the last 25 years. Owing to their extremely remote location, satellites play a critical role in measuring and monitoring Antarctic glaciology – revealing the timing and pace of glacial retreat in Antarctica.

Recently, the frequency of Pine Island Glacier calving events has increased. Today, the glacier is observed to be losing mass by a combination of calving events together with strong basal melting, where warm ocean currents erode the underside of the floating ice shelf. As the ice shelf both thins and calves enormous icebergs, the glacier discharge is unable to replenish the ice lost and the ice shelf front recedes from its previous position.

Antarctica’s Thwaites Glacier has been in the spotlight in recent years, as scientists have undertaken a multi-part international project to study the vast glacier from all angles. The urgency stems from observations and analyses showing that the amount of ice flowing from Thwaites—and contributing to sea level rise—has doubled in the span of three decades. Scientists think the glacier could undergo even more dramatic changes in the near future, according to NASA’s Earth Observatory.  Indeed, Thwaites Glacier is one of the largest contributors to global sea level rise from the West Antarctic Ice Sheet.

Relations Between Iraq and Turkey Workshop