Maybe It Will Destroy Everything': Pakistan's Melting Glaciers Cause Alarm 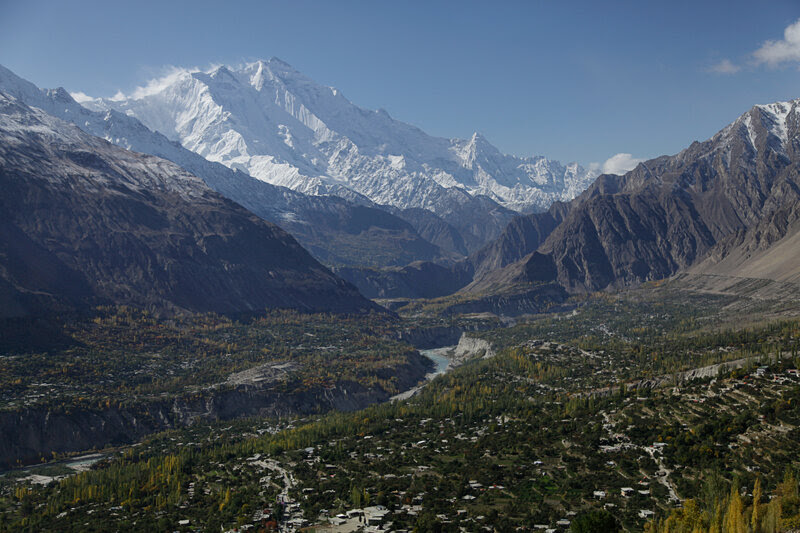 General view of the town of Karimabad, Pakistan, from the Ultar glacier. Pollution and global warming are causing the glacier to melt and form unstable lakes that could burst their icy banks at any moment.

For generations, farmers in the Harchi Valley in Pakistan's highlands enjoyed a close relationship with the glacier that snakes between two mountain peaks. It watered their fields, orchards and grazing lands.

Following local tradition, it has a name — Ultar — and a gender — male, because it is black, owing to the debris that covers it (female glaciers are white, residents say).

Now, their relationship is unraveling as pollution and global warming cause the Ultar glacier to melt and form unstable lakes that could burst their icy banks at any moment. Already this summer, much of Harchi's lands were destroyed in glacial floods.

Shamim Banno, a 55-year-old farmer, was working her potato fields when a flood rushed by. Tremors jiggled the ground. Car-sized boulders tumbled down the nearby waterfall and smashed into the river below. The water rose and she clung to a tree, shouting for her son, who was recording the flood on his smartphone, mesmerized. 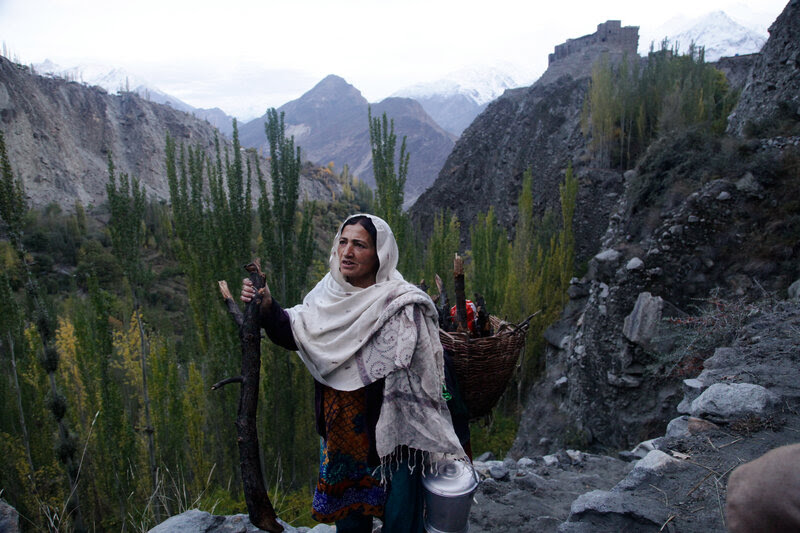 Shamim Banno, 55, walks up the Harchi Valley after she finished milking her cow. Farmers in the Harchi Valley in Pakistan's highlands enjoyed a close relationship with their glacier that snakes between two mountain peaks.

"If I try to shout like that again, my teeth would fly out," she giggled on a recent day, covering her mouth, which contained about four teeth. The flood "was different from anything we'd seen before," she said. "I thought it was the end of the world."

That summer was already troubling, said Banno. The handmade wood-and-rope bridge that links Harchi's terraced slopes was washed away four times in surging glacial melt. One bridge, she said, should have lasted more than a decade. 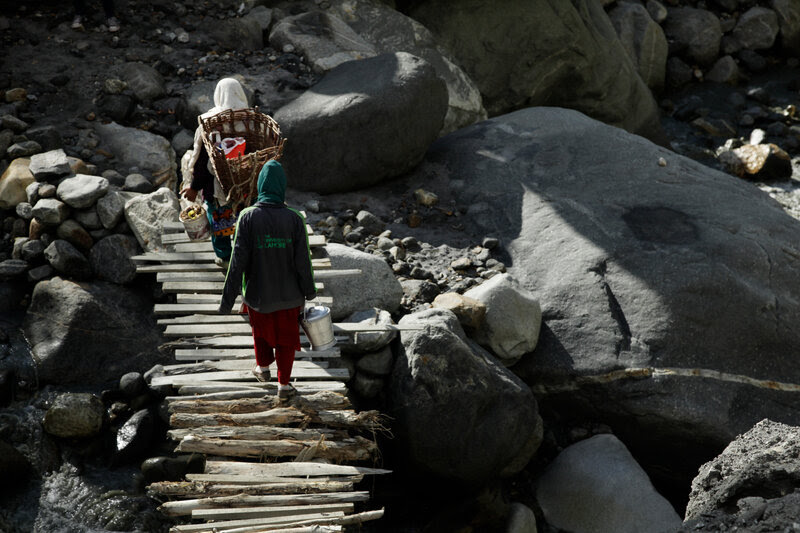 Residents walk over a handmade wood-and-rope bridge over the river in the Harchi Valley. This is the fifth bridge that residents built this year, after the first four were washed away in floods. Residents said before this freakish summer, a bridge usually lasted a decade.

Banno, who is illiterate and had not heard of climate change, said the bridge's fate scared the farmers. They began coming out in the mornings, "just looking, just watching the river," she said.

Pakistan's far north is an idyll of turquoise rivers coursing beneath slate mountains, with villages and orchards clinging to the steep slopes of the Himalayas, the Hindu Kush and the Karakoram ranges that crisscross this territory. They hold more than 7,000 glaciers, which have long supplied water to the hundreds of thousands of people who live among them.

But they are melting at an accelerated pace, compared with when monitoring began nearly 50 years ago. Some are shrinking. More than 3,000 glaciers have formed unstable lakes. At least 30 are at risk of bursting, which can trigger ice avalanches and flash floods that bring down water, debris and boulders. 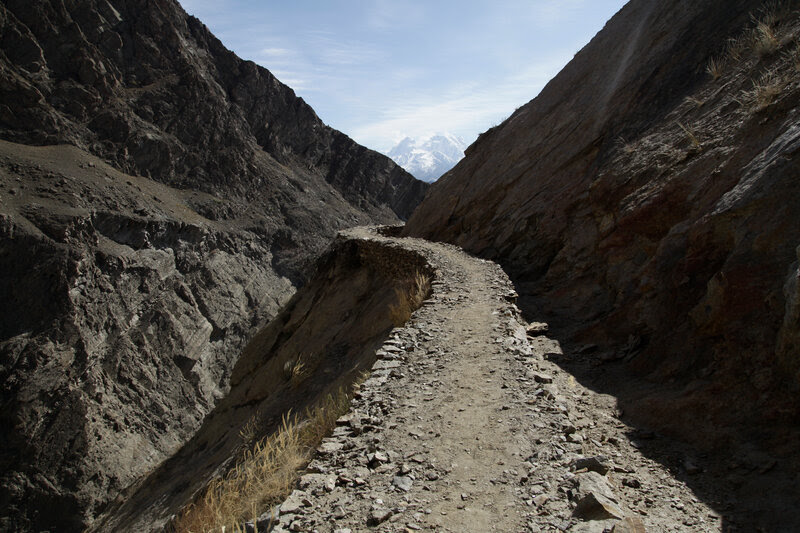 Water canals carved and built into the mountainsides have long been used by residents to tap glacier melt to provide water for their villages. But as the glaciers behave more erratically — surging, shrinking and flooding — some of the canals have run dry.

The situation is only expected to worsen because temperatures in mountainous areas are rising faster than the global average. And "if we stick to the present emission trends, we'll lose two-thirds of our glaciers," said David Molden, director general of the International Center for Integrated Mountain Development, who recently authored a 627-page study about the mountain ranges.

Even if warming is limited to 1.5 degrees Celsius (2.7 degrees Fahrenheit) above preindustrial levels, as called for by the Intergovernmental Panel on Climate Change in its landmark 2018 report, the mountains will lose more than a third of their ice, largely held in glaciers, Molden said. "The direction is pretty clear on where we are going, and that's the alarming news."

The impact will reverberate downstream because glacial melt feeds the Indus River basin, Pakistan's main water source for over 200 million people as it courses toward the Arabian Sea. "By 2050 you'll get less and less water," Molden said.

Pakistan can do little to halt global greenhouse gas emissions, to which it contributes less than 1%, said Federal Minister for Climate Change Malik Amin Aslam. "We need the world to wake up," he said, "and shift their political lethargy on climate change and start taking action." 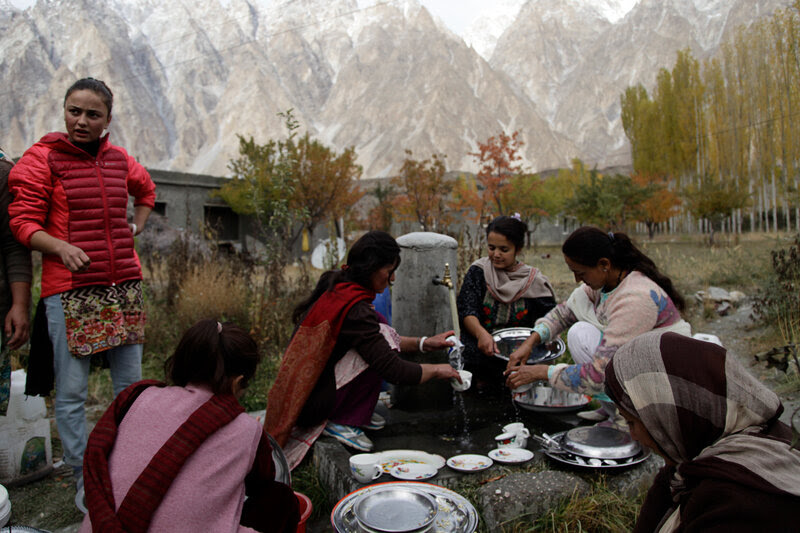 Women and girls wash dishes at a communal tap in the village of Passu, with the snow-capped Karakoram mountains in the background. Passu village relies on a nearby glacier — also called Passu — to water their fields, pastures and orchards. But the glacier is shrinking, and it is threatening the very existence of their village.

But regional factors are also accelerating glacier melt, including toxic smog that chokes South Asia through the winter. It is largely caused by vehicle emissions, farmers burning their crop stubble and brick kilns that emit dirty black smoke. Air pollution leaves dark soot on glaciers across the world.

Molden said governments are not acting to prevent this. "If they stopped all air pollution, you'd see the impacts tomorrow," he said.

So in ways big and small, hundreds of thousands of residents are scrambling to adjust. In the Harchi Valley, workers contracted by the local government are planning for the next glacial floods. They are building a road to give vehicles access to the river to remove large debris, like boulders. By the river, they have built stone walls to stop future surges from washing away their land. 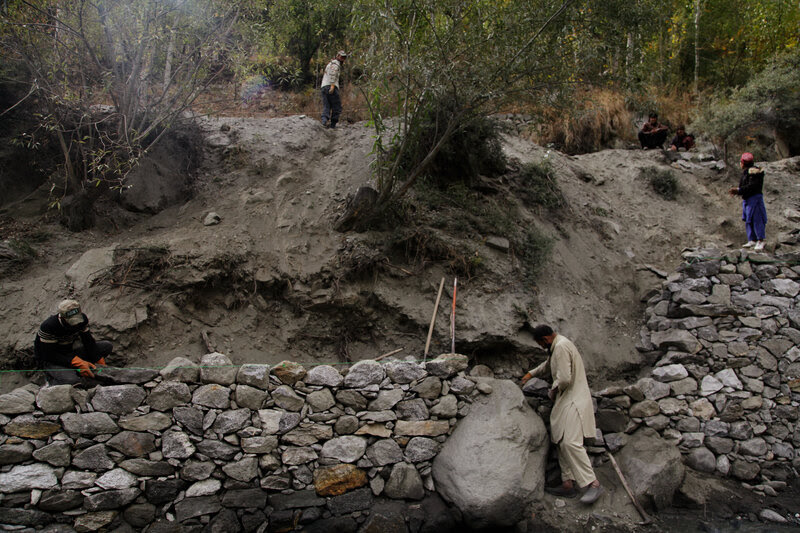 Workers build stone walls along parts of the riverbank in Harchi Valley, hoping that will prevent future glacial floods from washing away more land.

Down a valley on a recent day, government-contracted workers raced to dismantle a wood-and-rope bridge that was being nosed by a surging, 9-mile-long glacier called Shishper. Authorities want to save infrastructure, like this bridge, said supervisor Ali Ahmad Jan. But they have to work quickly, he said, gesturing to the creaking, black, blob-like glacier.

Residents of the nearby hamlet of Gulmit are waiting for United Nations funding to build a dam to block a glacier that lurked over their village's 31 homes. The U.N. is running a $37 million program to help residents adjust. Shishper, a 9-mile-long, black glacier (right), is edging toward a wood-and-rope bridge that government-contracted workers are racing to dismantle.

Community leader Shawkat Ali, 53, said the glacier used to water their fields — now it threatened to wash them away. He spoke in Gulmit's communal hall, where residents were also celebrating a wedding. Women and men sat on a rug-strewn floor, passing around tea and candies.

And another glacier they once relied on — called Passu — is shrinking. A local scientist, Dr. Sitara Parveen, assistant professor of geography at Fatima Jinnah Girls Degree College, who studies glacial melt and its local impact, recently led NPR to that glacier. It lies, as if within a giant bowl, between two mountains. And that bowl, once full, is emptying out.

Parveen pointed to where the glacier appeared to have peaks, like whipped cream, suggesting it was melting and cracking. "My children used to play there," she said. Now it is too dangerous.

Farther up the mountains, villagers are grafting new glaciers to replace their old ones, which dried up, said Rashid, a Gulmit resident who only has one name. 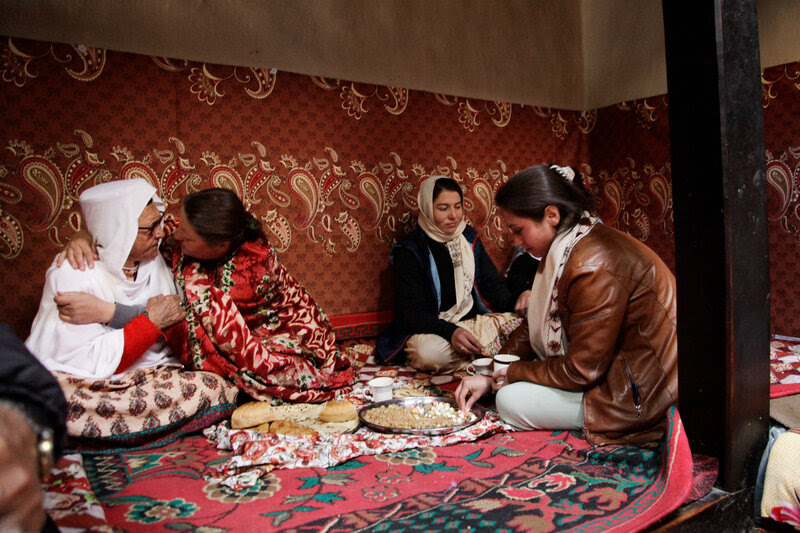 Gulmit residents sit around a brazier in a communal hall where they were celebrating a wedding. The men and women sat on rugs and passed around tea, candies and bread.

Rashid, a U.N. employee who helps administer the development project, said villagers are using an indigenous technique he called "the mating process." "You must have male and female glaciers," he said. Black, debris covered glaciers are male, and white, relatively pristine glaciers are female. (He said those efforts were not among those supported by the U.N. so far.)

Rashid said residents mix the material from both glaciers and add other bulking material like debris, cement and salt, and then plant the baby glacier in shaded mountainsides, where it attracts more moisture. "It grows within five years," he said. 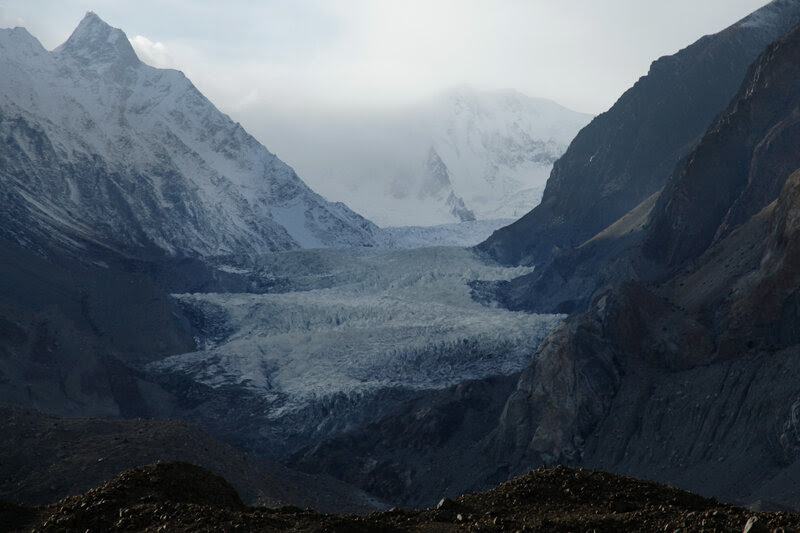 A view of Passu glacier from the Karakoram highway that connects Pakistan to China. The Passu glacier is shrinking, endangering the villages which rely on its melt.

Molden of ICIMOD and Parveen, the local scientist, said there is no evidence yet showing that works. But it shows residents are desperate, said Parveen.

Others like Banno, the farmer, said they live in fear of the land that once nurtured them and the seasons they once relied on. "The land will warm, and the water will come," she said of the upcoming summer. "Maybe it will destroy everything again. Maybe it will take my life." 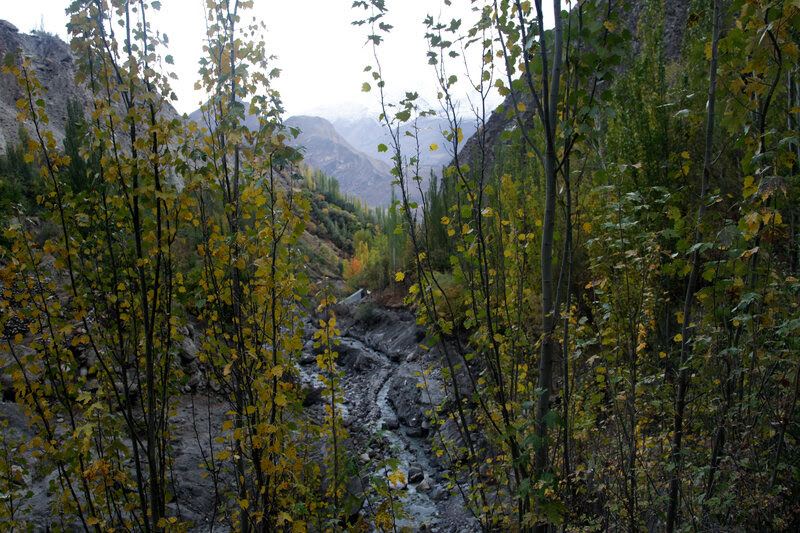 General view of the Harchi Valley.

A Water Reuse regulation, approved by the EU Parliament,