The concept of the Twin Dyke in northern Netherlands is almost ready to prove itself.  Along the Wadden Sea, a 2.5 km long double levee section has been constructed. The area between the levees is now being designed with controlled sea water inflow for the farming of salt tolerant crops and silt sediments. 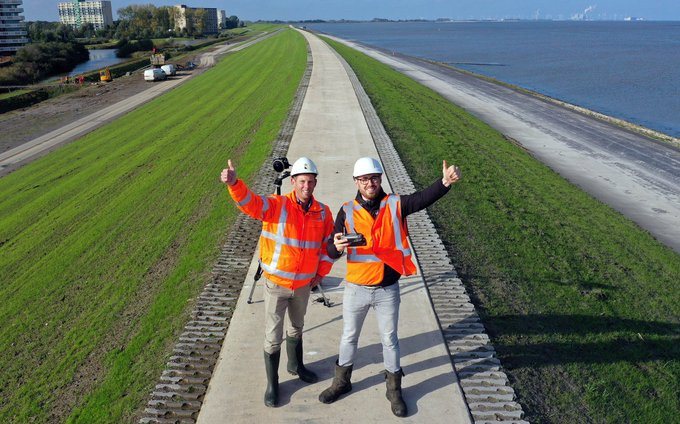 The Twin Dyke section is part of a wider levee reinforcement project for all levees near Delfzijl to meet new requirements that prelude on future sea level rise. The requirements also include the levees to be earthquake proof as this part of the Netherlands has one of the world’s largest natural gas fields. Gas extractions cause soil subsidence and earthquakes.

Most of the levees have been raised at the crest, widened at the toe and newly covered with asphalt at the seaside. The Twin Dyke section is an exception to this.

In this particular section the original levee kept its shape but an additional levee has been constructed inland, creating a ‘bathtub’. The original levee has been designed for overtopping so during a storm sea water can reach this enclosed inland. The concept fits within the general flood protection policy of the Netherlands that sustains the principle of raised levees also having its disadvantages. In general, higher levees increase flood risk in case of a breach causing the water to flow in with much higher force.

Additionally, the Dutch national flood protection policy calls for levee reinforcements that includes additional objectives, such as benefits to agriculture, nature and recreation. The reinforced levees have been commissioned last December to compete the flood protection part of the project. 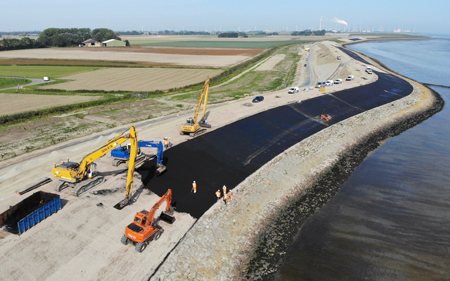 The final part of the levee reinforcement was the asphalt paving on the sea side (photo: Ommelanderdiek)

The area between the levees has been divided into two parts. One part is reserved for farming of salt tolerance crops. The soil of the enclosed inland is expected to become more saline as a result of sea water overtopping the sea levee during storm surges.

More salt water will enter the enclosed inland when a planned culvert is constructed in the levee. This culvert can be closed during storm surges, but will open under normal weather conditions. This way, the second part of the inland will turn into a tidal zone making the soil even more saline.

The latter part will also be used to capture suspended clay particles. At high tide, the murky water of the estuary flows into the basin, where the clay particles can settle out, leaving cleared water. Over time this is expected to generate a deposit of construction-quality clay, for example for future levee reinforcement. But also creates a foraging area for birds at low tide. 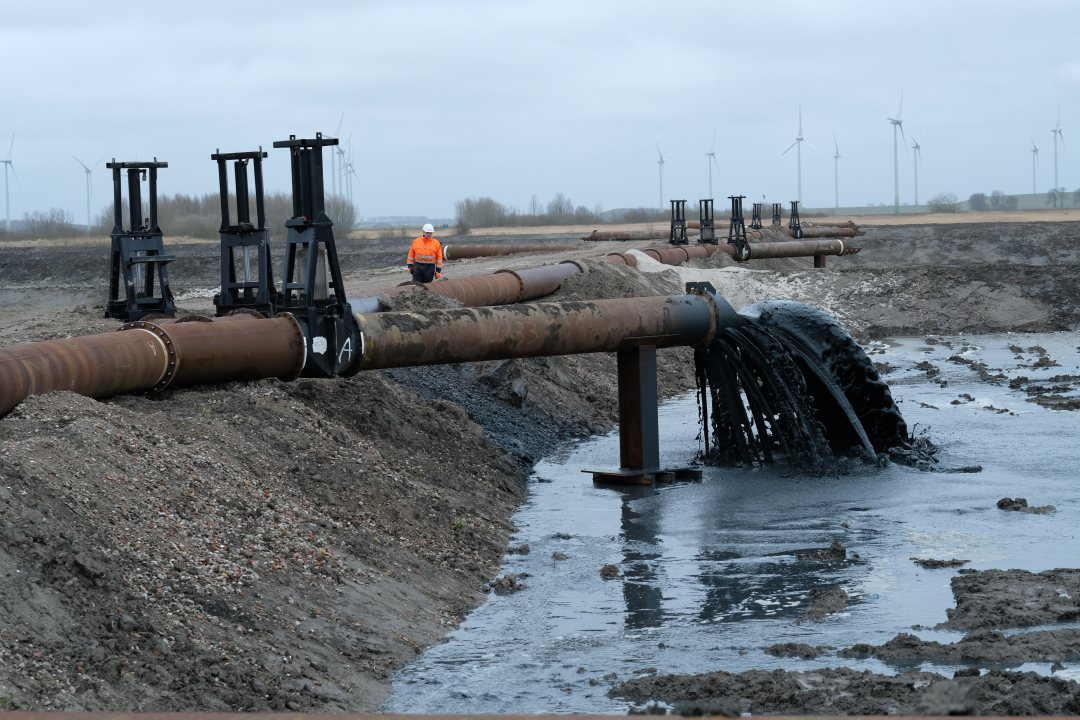 According to Kees de Jong, Strategic Advisor at Regional water authority Noorderzijlvest, the construction of the Twin Dyke proved as expensive as raising the existing one. ‘It illustrates what we call adaptive delta management. The flood scheme meets future requirements and integrates the policy on coastal protection and salinisation.'

Nienke Vermaat, staff advisor and project leader on behalf of the province of Groningen, mentions the additional societal benefits. 'We hope the concept will bring us more commercial aquaculture and saline agriculture, as well as improvement of the water quality in the whole Eems-Dollard estuary.'

National Sovereignty Versus Transboundary Water Cooperation: Can You See International Law Reflected in the Water?

Why a “water-energy-food-ecosystems” nexus approach to foster transboundary cooperation?